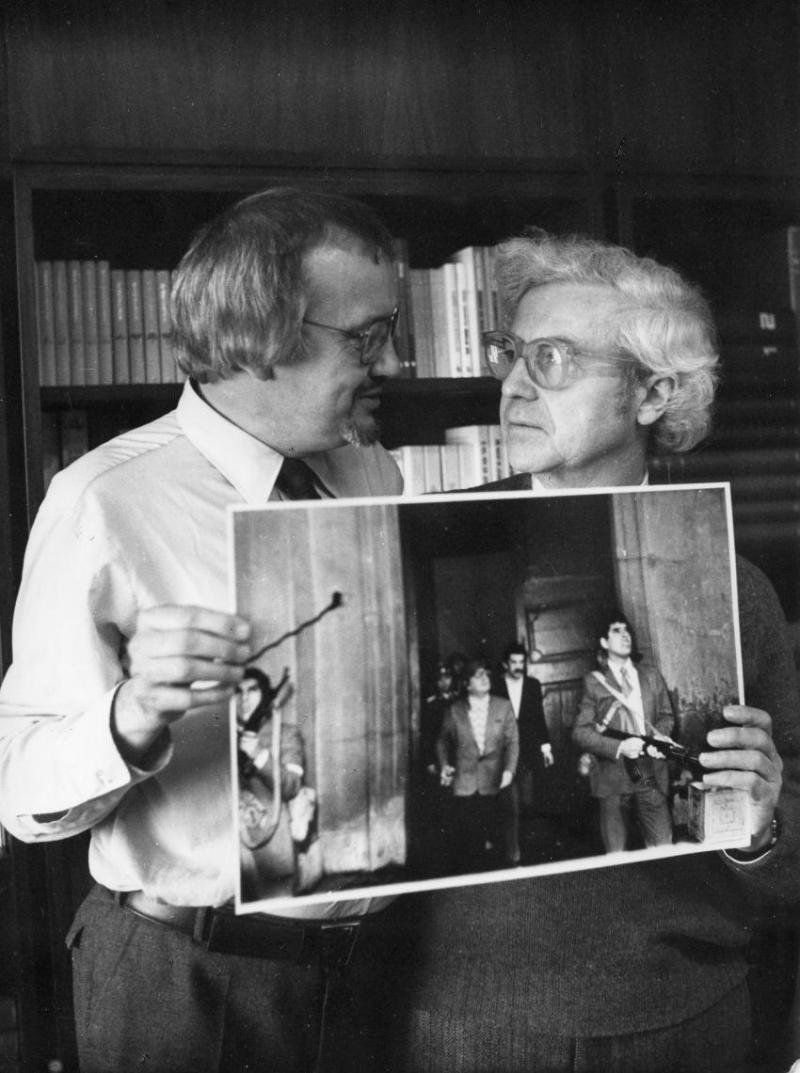 The most important news event of 1973 was the military coup in Chile, which put an end to the democratically elected government of president Salvador Allende, and subsequently his life.

Photos showing Chilean President Allende moments before his death only reached The New York Times and other international newspapers four months later. The photographer remained anonymous until 2007,when according to the World Press Photo Foundation (WPPH) “he died and his identity was revealed to be Orlando Lagos, a governmental staff photographer at the time“.

A Chilean journalist, a well known con artist named Camilo Taufic, had attributed the picture to Lagos and the WPPh naively went along with it.

But it was a big fat lie. For starters, Mr. Lagos never in his life had acknowledged to be “the anonymous photographer”. Even Taufic had to tell this fact in his own report- again, that Orlando Lagos NEVER said that he took those pictures. Now, it is really striking that WPPh Foundation, without any question has assigned Lagos name under the photo on their website. I mean, they should know better.

Rightly so, we expect much better from them.

Camilo Taufic presented not one shred of proof of his statements. Even more, ALL the data he provided to write his newspaper report, and the base for WPPh to change their records, was a copy-paste from a book written 8 years earlier. All that Taufic said that it was known only by him as confidential information since 1973, was actually written by a french journalist 8 years before his report. ALL that confidential information that, he said only he knew, was actually taken from Marie-Monique Robin’s book “The Photos of the Century. 100 Historic Moments“. Compare it with Taufic’s newspaper report of 2007 “La secreta historia del Chico Lagos, autor de las últimas fotos de Allende”.

The only piece of evidence that Taufic presented in his report was Circumstantial Evidence– that Orlando Lagos was the president’s personal photographer for many years. A necessary  condition but not sufficient to prove the authorship. Even more so when we learn that President Allende had 5 personal photographers on September 1973. Mr. Lagos was the Chief of a group of 4 other Photographer’s  of the President; named Leopoldo Victor Vargas, Guillermo Hidalgo, Gabriel Amado, and Hugo Pueller. And two photo lab assistants; Manuel Díaz, and Juan Quiroz. An important information that Camilo Taufic omitted deliberately. It is known that a sham can be done either by calculated omissions as well as by inaccurate information.

Now, it was only in 2012 when the true identity of that “anonymous photographer” came to light; Presidential photographer Leopoldo (Leo) Víctor Vargas recorded the “Chilean President’s Last Moments as His Government Fell“.

Leo Vargas, was then a Chilean Air Force Sergeant, Aerial Photographer and Photo Lab specialist, who in 1964 had been assigned to work as a photographer at the Chilean Presidency. There he served President Jorge Alessandri (1964), President Eduardo Frei (1964-1970), and President Salvador Allende (1970-1973).

The WPPh 1974 Contest in Context

The jury was unanimous in their choice to present the World Press Photo of the Year award to the anonymous Chilean photographer. Although jury member John Morris, picture editor of The New York Times, refrained from voting as he had been specifically asked by chairman Joop Swart to submit the photo to the contest. Incidentally, this request was in complete agreement with the recurring advice of former jury members to seek actively for interesting contest material. The participation of well-known press photographers remained somewhat problematic, and the lack of good material, such as darkroom equipment and printing paper, proved to be a serious obstacle in Asian and African countries.

In a joint interview, jury member Dmitri Baltermants and John Morris looked back on their experience. Baltermants emphasized the importance of competitions and exhibitions in the Soviet Union, as they provided photographers with the rare possibility of presenting their work uncut and for a wide audience. Morris drew attention to the collapse of the picture magazine, which had robbed many great photographers from their livelihood. Talent is not enough anymore, Morris warned, nowadays ideas and enterprise count as well.

Chair of the jury